Hunting may seem like an out-dated hobby to many, but for those with experience on a hunt of any variety, it is an unrivaled recreational activity which offers participants a chance to exercise, commune with natural habitats, and occasionally, dine on the fruits of their labor. If you are interested in hunting but have little experience, we suggest you begin by learning how to hunt quail, a ubiquitous and delicious species found across the United States and the World.

To hunt quail successfully, you must know the most common varieties of quail, their appearance, their habitat, and what to do with the appropriate equipment once you have located a covey, a group of quail, in the wild. As we will describe below, the properly equipped hunter can locate and bait quail according to their preferred method and safely operate a shotgun loaded with the appropriately sized ammunition. Then, with a touch of luck, you may watch a delicious dinner flutter to the ground.

The Types Of Quail

In the United States alone, there are many varieties of quail you may encounter depending on which region of the country you are planning your hunt in. We have briefly described the most common types of quail along with some helpful information regarding their appearance and habitats below.

This is by far the most common type of quail in the United States. Its population is concentrated in the Midwestern states but it can also be found throughout the American South and in Mexico. The bobwhite quail is easy to identify as its brownish body is topped off by a telltale white streak along the length of their heads. They can be found in sparsely wooded areas with easy access to grassy fields in which they feed across the country.

Button quail are native to Asia, Australia, and sub-Sharan Africa, but they are being bred more often in North America in the 21st century. Button quail prefer a sandy habitat with access to wooded areas as opposed to the grassy terrain preferred by the bobwhite quail. Their appearance varies by region but generally includes brown and black tones perforated by yellowish spots.

As the name implies, the California quail is concentrated in the Western United States with some populations extending over the Rocky Mountains into the Midwestern states. It prefers a habitat similar to that of the bobwhite quail and can be distinguished primarily by the bluish tint found on its stomach.

Like the button quail, the Japanese quail is not native to the United States, but it is being bred in North America at this point. Japanese quail look very similar to button quail but they have a rounder body and a whitish stomach.

How To Hunt Quail: Where And When

Unfortunately, quail populations have been on the decline in recent decades as the species’ habitat has become more and more sparse. This situation makes opportunities to hunt quail less abundant and hence more valuable. If you look carefully, you will still have the opportunity to learn where and how to hunt quail most effectively.

Quail populations are concentrated in the central portion of the United States. The states with the highest quail populations include Texas, Oklahoma, Nebraska, and Kansas although quail can also be found across the country. If you are interested in to how to hunt quail internationally, populations can be found in the eastern portions of Mexico and across Asia, particularly in Japan.

Quail typically feed on worms and small bugs found readily in open fields without excessively long grass which hampers the movement of quail. While they prefer to feed in an open field, quail also prefer an accessible wooded area they can use to hide when they feel threatened. Therefore, the ideal place to find quail is a habitat in which the terrain frequently oscillates between wooded areas and small grassy fields.

When to Hunt Quail

Before you undergo any hunt, quail hunts included, you must check with the local game board to ensure you won’t be hunting out of season and attracting unwanted attention from the game warden. Quail season varies from state to state but typically begins in September or October and stretches through January.

Regardless of the time of day, keep in mind that quail typically spend the morning looking for food in grassy fields before retiring to a shady, wooded area for the hottest part of the day. After the sun has set, quail will move back to the grassy fields and continue looking for food. Besides noting these general behavior patterns, keep in mind that quail feed in fairly open fields with greater enthusiasm after a bout of rain has driven their prey up from under the ground.

You may hunt quail using bait or using dogs. If you use bait, collect traditional birdseed or dried corn and set it out in an area where quail populate. Once you have laid your bait, retreat to at least 25 yards away and crouch behind an obstacle that will make your presence less obvious. It is important to stay back and use your binoculars to confirm the presence of a quail; otherwise, you will scare them off before you can get close enough to fire without your shot scattering.

If you have access to specially trained quail-hunting dogs, you may forgo bait altogether and instead have your dogs identify the location of a quail, or a covey of quail, by smell. Your dog will scare the quail into flight, at which point you will have the opportunity fire. This strategy is more adventurous and less lonely; however, raising a great hunting dog is a huge investment and is typically practiced only by very serious hunters.

No hunt is successful without the necessary preparations. Before you set out to hunt, especially if you are new to the sport and just learning how to hunt quail, ensure you have checked the weather report, researched the terrain in which you will hunt, and brought enough provisions to perform in the field comfortably.

Quail hunting is typically done in pairs or small groups which necessitates brightly colored clothing to ensure nobody in your party is, at any point, unsure of the location of his or her companions. If you hunt with dogs, consider clothing them in brightly colored vests so you don’t accidently weigh down your valuable hunting dog with shot. Bright colors, in addition to general gun safety practices and awareness, should keep you and everyone else joining you on your hunt safe from accidents.

It is important to find a shotgun with which you feel comfortable above all else. That being said, we recommend either a 20-gauge or 28-gauge shotgun. The 20-gauge has a long barrel which will keep your shot together and optimize accuracy while the 28-gauge is lighter and easier to use, making it an ideal selection for hunters who are just learning how to hunt quail.

Ammunition should be carefully selected to be sufficiently lethal without ruining too much of the meat on the bird. Anything smaller than 6-shot may be too small to kill the bird whereas anything larger than 8-shot will be large enough to ruin much of the quail. We recommend 7.5-shot, which should provide a localized, but lethal blow to the bird.

Some quail hunters have moved to using rifles and bows, but we recommend you avoid these practices. Because quail are small, a successful shot with a rifle or a bow would require hyper-accuracy and, even if you were successful, you would find that you had ruined most of the meat on the small bird by electing to use a weapon more damaging to the quail.

You must remember to dress appropriately for moving throughout a quail’s habitat which is often damp, wooded, and rife with briar patches. You should wear long sleeves and durable pants to combat the briars, and a good pair of boots to keep your feet dry. Be prepared for rain and low temperatures, the probability of which you can assess using the weather report preemptively.

You should have binoculars to help confirm the presence of quail whether you choose to hunt with dogs or not. It is also wise to bring a knife and pliers, or some sort of multi-tool to help you cut your way through densely wooded terrain if need be. If you feel like going the extra mile, you can always include a map or GPS device to navigate the area in which you are conducting your hunt. 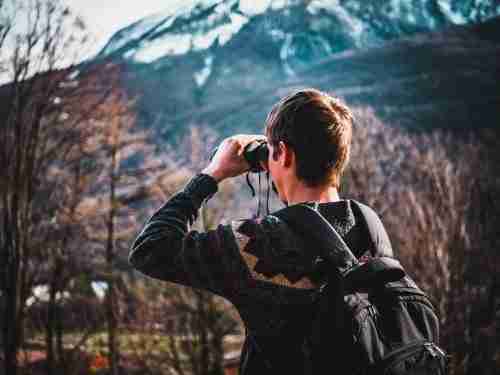 If you are eager to learn how to hunt quail, you are taking the first steps toward a thrilling recreational journey which often morphs into an obsession. To ensure your first experiences are rewarding and successful, you must know to look for quail in their unique habitat: areas that feature grassy fields and wooded hiding spots. Once you know where to look, you must be prepared with the proper clothing, equipment, and firearms. If you internalize the advice above, then you now know how to hunt quail.