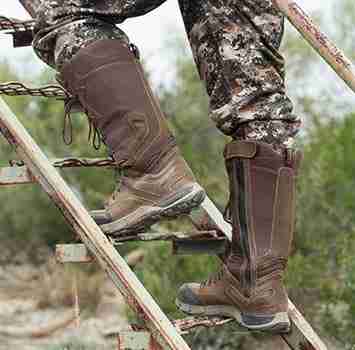 Humans have hunted for as long as we’ve existed. For many people, it’s a pastime. For some, it’s a way to put food on the table. For others, it’s a competitive event they wait for each year.

While hunters have been around for generations, things have changed throughout the years. One of the biggest changes is that the technology and gear used for hunting is much more advanced now.

That is to be expected – generations of innovations and breakthroughs in hunting gear have given way to new options. But when we think of hunting gear, what exactly comes to mind? Sure, there are things like firearms, stands, and even travel gear to help us get to the perfect location and be ready to go.

But what about clothing? And more specifically, footwear? Even if your jeep or ATV takes you into the woods part of the way, you’ll likely be depending on your own two feet to carry you toward your prey. That means the way you care for your vehicles will play a big role in your trip.

That’s why it is a good idea to get the best hunting boots possible. But when you’re shopping for your options in hunting footwear, how do you know what is best? Today we’ll take a look at Rocky hunting boots.

Who is Rocky? What Are Rocky Hunting Boots?

Rocky hunting boots are some of the most popular types of hunting footwear in the industry. While the brand name of a product itself isn’t what makes it good, big brands usually got their status by providing quality products their customers can depend on.

These boots come from Rocky, a company that was established in 1932, giving them over eight decades of experience in the industry of hunting equipment. Shoes are the specialty, and this has been true all the way back to the company’s origins.

Two brothers, William and F.M. Brooks lived through the Great Depression where they decided to move from Columbus to Nelsonville, Ohio to begin a shoe company. Soon they had employed hundreds and begin pushing out thousands of pairs of shoes per day.

Their success continued to swell through the 1940s and 1950s, culminating in relationships with many successful businesses such as JCPenney, Reebok, and more. Even after the company was sold to Irving Drew Shoe Co. in the 1950s, the progress continued.

By the 1970s, after other company initiatives had proved lackluster, the brand was reborn with the rugged name of Rocky – it echoed the sentiments of the brand as a durable outdoor choice that hunters could depend on. This led to more decades of progress.

The introduction of new products followed and, eventually, the company went public. Rocky boots have developed a good reputation. These boots are designed to hold up to intense use, tough terrain, moisture, and all the other hazards hunters may encounter.

They look the part, too. Brandishing the appearance of a rugged type of gear that fits in just fine at the forest, these boots are a top choice for many hunters.

What Makes These Boots Unique?

If we’re going by the content on Rocky’s website, we have three reasons why their boots are unique. They’re promoted as being ruggedly durable, unbelievably comfortable, and built for hunting.

This high-performance type of hunting footwear is designed specifically for the task itself. There are a lot of people who simply by regular boots from generic brands for their hunting expeditions. And while these may suffice, they can’t provide the true level of comfort, protection, and style as a boot made for hunting specifically.

Let’s look at a few of the specific characteristics that make Rocky’s hunting boots such a popular choice among outdoor types.

These are just a few of the characteristics that make Rocky’s hunting boots unique. While these certainly aren’t the only boots that offer such qualities, most Rocky hunting boots are built with these as standard features.

These boots aren’t just good for hunting – they’re made primarily for such a task and such an environment. Anyone who is going hunting and wants boots made to withstand the elements and threats therein should consider Rocky’s impressive lineup.

How is the Budget Structure Set Up?

While everyone has a different financial situation and thus a different budget for boots, it is always good to have some pricing variety.

That is to say, boots that come in different pricing tiers can provide something for everyone. They can also give a buyer an easy option to try for an entry level model, while providing other pairs they can save up and aim for if they find the brand offers them what they look for in a product.

Let’s take a look at some of the popular models from Rocky and see how exactly their budgets compare to the features they offer.

This is a classic example of a middle-tier type of boot that offers a great look, nice features, and a reasonable budget. One of the company’s middle-of-the-road options, this one gives you insulated, waterproofed material built for improved traction and foot protection. 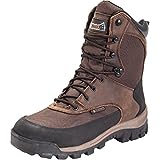 Another option with the same level of waterproofing and insulation, this one comes at a more affordable budget. It is one of the cheaper models in the inventory, and thus has a little less padding and support than the others. But for those who favor lightweight and flexible construction, this could actually be a better option.

One of the more expensive models in Rocky’s inventory, this pair shows off just how much work and attention can be given to boots by the company. Full-grain leather and nylon material allows for cushioned fitting and good airflow while still giving wearers the benefit of insultation and waterproofing. For the hunter who doesn’t want to spare an expense when it comes to protecting their feet during the hunt, this is a good pair to consider.

As we can see, the pricing structure of Rocky hunting boots offers something for everyone. Think of it this way – your hunting experience isn’t just directly proportionate to your ability to bag a big catch on your trip. It also influences how much money you’d like to spend on your gear.

If you’re a beginner hunter who doesn’t like to go too often, there’s no real reason for you to invest in a very expensive pair of boots. Likewise, a veteran hunter who hunts as a regular hobby may want to spend a little extra on boots since they will be used much more often.

One glance at Rocky’s website will provide some insight into how their products are perceived.

Many of their products have great feedback from customers. This shows they are a reliable option that lives up to their claims. Customers who have bought the products received something that was in line with the claims made on the site and the expectations for a hunting boot.

There may be concerns about going off the reviews a company receives on its own site. But feedback at retail stores that carry Rocky hunting boots shows a similar response from buyers.

Positive customer feedback on most products means the company takes a consistent approach to their manufacturing and knows what their customers want.

How Do They Compare to the Competition?

There’s no question that Rocky is one of the biggest names in the hunting boot industry. They have got that status through years of innovation and a willingness to listen to their customers.

However, there are a lot of hunters in the world. The demand for quality boots is big, and more than just one company can satisfy. This means there are plenty of options out there – and a lot of competition usually means a better end result for the consumer.

So how do Rocky’s boots compare to those of competitors? Let’s take a brand like Bogs. Bogs’ men’s hunting boots have received some high reviews as well. They’re designed to remain warm and dry even in harsh climates conducive to the opposite effects. 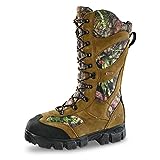 Then there are boots like those from Guide Gear, which provide a great level of insulation and padding similar to Rocky’s. All these boots could be lumped into a similar category – high-quality hunting boots made for specific tasks that have all received good reviews from buyers.

It is difficult to say whether one brand is definitively better than another. Everyone has a certain preference, and for those who have used Guide Gear or Bogs before, they may say those brands are superior simply because said brands have served them well in the past.

Rocky isn’t the only good brand of hunting boot out there and, in some ways, their competitors may have advantages over them. However, on average, Rocky has the features, pricing structure, and good feedback to hold up against any option in the industry.

What’s the Final Verdict on These Boots?

Rocky hunting boots are a great option if you like going out into the wilderness to track your prey. Offering the unmistakable rugged and outdoorsy look hunters love, they check all the boxes in the aesthetics category.

But that’s not all – they have the features you need when it comes to hunting. From padding to ankle support to breathability, these boots offer it all. They’re built to withstand moisture, tough terrain, and more, giving you a great level of protection against anything that could bring your hunting efforts down.

Given they are available in a variety of styles and at multiple budget levels, these boots can be a great option for any hunter. Regardless of their stylistic preferences and their budget, any hunter can benefit from a pair of Rocky hunting boots.

Are There Any Coupons or Special Deals Available?

Everyone loves a deal, and Rocky sometimes runs special deals to give hunters a chance to save some money.

There are many ways to save money on products like hunting boots, and staying on the lookout for special deals or coupons is a great strategy.

What is better than a high-quality hunting boot that is designed for the toughest of environments? The same boot for a lower budget!