Choosing the best gun for your child is never an easy task. If you are going to set your child on the path and way of life that involve firearms, there’s more to choosing a gun than models and brand names. It’s quite obvious why you just can’t choose haphazardly.

If you are looking to buy your kid his or her very first gun, then you’ve come to the right place.

For this post, we will be reviewing a popular youth 22 rifle, the Crickett 22 LR. But first, we have prepared a quick guide on how to choose a firearm for your child.

Quick Navigation
How to Choose a Child’s First Gun?
Youth 22 Rifle Review: The Crickett Youth .22 LR Single Shot Bolt-Action Rifle
Features:
Looks Like a Toy But…
Shooting Design
Build Quality
Shooting and Action
Pricing
Pros and Cons
What the Reviews Have Been Saying
What We Think

How to Choose a Child’s First Gun?

So what are the crucial factors to consider when buying the first gun for your son or daughter? Below are some of the key considerations:

Keep these critical factors in mind when purchasing that important first gun for your young one.

Many avid gun owners will tell you that the Crickett Youth .22 LR Single Shot Bolt-Action Rifle is one of the best starting guns for young shooters. Before we get into the meaty details, let’s first check out the key specs of this firearm: 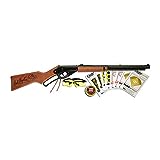 Most parents will most likely buy a Daisy 1938 Red Ryder BB Gun for their kid’s first gun. That’s fine because it’s hard to go wrong with the classic BB gun.

However, I prefer the Crickett .22 LR Rifle. From its appearance, you’ll think that the Crickett 22 LR is a toy gun, thanks to its fiberglass and polymer-filled stock. However, you’ll be surprised that it actually feels like a real rile, albeit a downsized one.

The Crickett is a tiny gun, it just measures at the legal limit for rifles. This is no surprise since it’s a rifle that is specifically designed for the “children’s” gun market. If you’re going to buy it straight from Crickett, you can choose from the wide range of stock options from the patriotic Amendment to the girlish Muddy Girl Serenity.

As you can see, the Crickett .22 LR Rifle is a bolt action, single-shot only rifle. For its safety feature, the gun has a bolt that controls whether you can cock the weapon or not. To cock the gun, a plastic knob must be pulled backward on the bolt in order to cock the firearm.

Pulling the trigger will shoot the gun and opening the bolt will eject the spent shell.

The Crickett 22 is also available without the added “Key Safety Feature”, although the models that can be found in most stores will have this safety feature. This feature is basically the button on the bottom of the rifle that when depressed, prevents the bolt from closing. To unlock the button, you need the “key” to insert into the mechanism around the button.

This is a bit of a controversial feature. While it does keep a child from firing the gun without the key, it’s also very easy for the shooter to push the button accidentally while holding the gun. You can use a scope with the rifle but that would require a special mount that is purchased separately.

To be quite frank, the build quality of the Crickett 22 is not the best. Some might even say that the gun feels cheap. Many parts of the gun would have been significantly improved by swapping plastic parts for metal ones. It really gives off an impression that it was slapped together.

Well, it’s weird to be complaining about the build quality for a gun that’s below $120 but I was definitely expecting better. For many youths, this shouldn’t be a problem though.

While the build of the Crickett 22 is nothing to write home about, it does more than make up for its shooting performance. With that said, the gun is very accurate and shoots exactly as expected. It’s a well-behaved gun which is important for a child’s rifle.

Since this is a gun that’s aimed for kids, its length of pull is very, very short. However, even adult shooters would find the pull to be quite manageable. It’s worth mentioning that the length of pull is a whopping 12 inches.

The bolt action feels great and cycles nicely. However, the cocking pull is a bit harder than I have expected, probably harder than it has any right to be. There’s also the “gripping” system that is located in the back of the bold which doesn’t accommodate the fingers. Plus, the plastic construction really takes its toll as it makes the action feels flimsy.

What about the trigger? For a kid’s rifle, the trigger is considered to be the heart of the gun. Unfortunately, the Crickett 22’s trigger leaves a lot to be desired. According to Crickett, the trigger pull is about 2½ to 3 inches. However, I doubt it since mine feels about 6 pounds on the trigger. The pull is just harsh and rugged.

The Crickett Youth .22 LR Single Shot Bolt-Action Rifle costs about $120 which is a great price for a child’s rifle. However, the price does come with plenty of caveats and most of the corners that have been cut lies with the build quality.

Although this youth 22 rifle looks like a real gun, its plastic components tell a different tale. Almost feels like a toy. However, this makes the Crickett 22 a great choice for absolute beginners. It is light and easy for young ones to handle and is quite an accurate shot which is great for building confidence.

So what are the hits and misses of this bolt action rifle?

What the Reviews Have Been Saying

So how does the Crickett 22 fair with the other buyers?

For the most part, this youth 22 rifle have some fairly positive reviews. Most of the reviews say that the gun is lightweight and is a breeze to operate. It just has the right size which is ideal for young shooters. One review mentioned that in no time, his kid has started shooting accurately with the gun. As mentioned, this is a very accurate rifle which is great if you’re looking to build confidence with your kid.

Many reviews also mentioned that the gun comes at a great price. Here are some examples of the positive reviews:

You would be surprised how much fun this little gun is to shoot! Its small size makes it a great pack rifle too. I would recommend this gun as a perfect bug out rifle to someone who does not want to spend a lot. Best money on a firearm I've ever spent at Cabela's. - Taylor88

Got the 22 for my daughter and within half hour she was hitting the target at 50yds with cricket scope. She now keeps asking when are we going to the range. The rifle is great first-time shooters easy to load and shoot. - Jeff M.

As for the negatives, a couple of reviews mentioned that there are several issues with the gun. One reviewer wrote that there were issues with ejecting the casings, after just two outings. The cocking mechanism is also very difficult to operate. Several reviews were also not thrilled with the build quality and feel of the rifle.

Take a look at some of the negative reviews:

If you want to expose a youth to shooting, go ahead and spend the money on a better gun. I bought one for my girls, and have had nothing but issues out of it. After two outings, it had issues ejecting the casings. The cocking mechanism is difficult to operate. It is what it is, cheap and low quality. - EdgemoorRedneck

If you happen to see a Crickett dirt cheap, don’t be afraid of buying it, they aren’t really BAD guns… this Crickett I bought second-hand for $50 and others are out there in that price range. Pull out the safety, stick it in your GHB and you have a nice little setup. - Salt-N-Pepper

The Crickett 22 rifle comes at a great price which is the main selling point of the gun. As far as a youth 22 rifle is concerned, it’s one of the most accurate shooters out there. It’s very light and easy to operate, making it a good option for beginners.

However, there are some glaring drawbacks about the gun which prevent it from becoming a must-have firearm for youngsters. It’s not a bad gun by any means but I will only recommend it for absolute beginners and there’s an issue with your budget.

DPMS Full Auto SBR CO2-Powered BB Air Rifle with...
Check Price
Recent Posts
How to Hunt Rabbits without a Hunting Dog November 5, 2019
What Are Some Ways to Successfully Call A Deer? October 18, 2019
What Is A PCP Air Rifle? Important Things To Know October 1, 2019
Centerpoint Sniper 370 Review: A Fantastic Crossbow to Choose September 9, 2019
Ruger 22 Rifle Review: Does It Live Up to Its Name? August 26, 2019